Note: There is a good chance that from the time I've posted this to the time you're reading it, some or all of the trending items may have changed.  That said, there will still be thousands of people talking about these stories!
Facebook Trending

LIGHTNING RECORDS
Meteorologists have revealed details of the most extreme lightning bolts ever recorded.

They say a lightning flash seen over Oklahoma in 2007 was the longest ever reported, with a horizontal distance of 199.4 miles (321km).

And over southern France, scientists also recorded a flash of lightning that lasted continuously for 7.74 seconds in 2012, the longest duration ever reported.

COREY FELDMAN
Feldman, famous for roles in “The Goonies,” “Stand by Me” and “Gremlins,” appeared on “Today” to promote his new album, “Angelic 2 the Core,” with “Corey’s Angels” in tow, providing the music for Feldman to sing and dance to. The record is dedicated to Michael Jackson, who seems to have inspired Feldman’s choreography, too.

Feldman was blasted online for his odd performance, and the comments were so brutal that he actually posted a video on Facebook where he cried about the way he's been treated.

ADRIAN PETERSON
Adrian Peterson left Monday night’s game against the Packers with what appears to be a serious leg injury.  Then, Peterson was dragged through some kind of restaurant en route to the locker room. Is that a design flaw in the Vikings’ new stadium, making it even farther to the locker room? 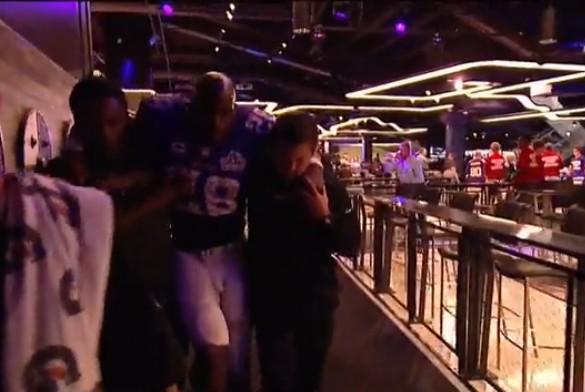 CHRIS CHRISTIE BRIDGE-GATE TRIAL
New Jersey Gov. Chris Christie (R) knew that members of his administration were involved in a dangerous and vindictive plan to shut down lanes of the busy George Washington Bridge in 2013, prosecutors said Monday.

The U.S. attorney’s office made the allegation Monday for the first time, in the opening of a trial for two Christie administration officials accused of carrying out the plot and then covering up, The New York Times reported. The aides’ lawyers have also said Christie knew what they were doing as it was happening, which Christie denies.

MICHAEL SCHUMACHER
Michael Schumacher 'cannot walk or stand unaided', two and a half years after a skiing accident.

The full state of the former Formula 1 champion’s health was disclosed as part of court proceedings in Germany.

Schumacher’s family are suing a German magazine over a report last year which claimed he could walk again.

TOXIC WATER DUMPING INTO FLORIDA AQUAFER
A massive sinkhole underneath a gypsum stack at a Central Florida phosphate fertilizer plant has dumped 215 million gallons of acidic water into the Floridan aquifer.

In a release issued Saturday night, officials say the products were sold mainly in Ontario and may have been distributed to other provinces.

The agency says food contaminated with listeria may not look or smell spoiled, but it can make you sick. Symptoms include vomiting, nausea, persistent fever, muscle aches, severe headache and stiff neck.

There have been no reported illnesses connected with the salmon products.

I finally found a Trump supporter -- this morning when I went to buy coffee. (I noticed a Trump bumper sticker on his car.)
“Hi,” I said. “Noticed your Trump bumper sticker.”
“Yup,” he said, a bit defensively.
“I hope you don’t mind my asking, but I’m curious. Why are you supporting him?”
“I know he’s a little bit much,” said the Trump supporter. “But he’s a successful businessman. And we need a successful businessman as president.”
“How do you know he’s a successful businessman?” I asked.
“Because he’s made a fortune.”
“Has he really?” I asked.
“Of course. Forbes magazine says he’s worth four and a half billion.”
“That doesn’t mean he’s been a success,” I said.
“In my book it does,” said the Trump supporter.
“You know, in 1976, when Trump was just starting his career, he said he was worth about $200 million,” I said. “Most of that was from his father.”
“That just proves my point,” said the Trump supporter. “He turned that $200 million into four and a half billion. Brilliant man."
“But if he had just put that $200 million into an index fund and reinvested the dividends, he’d be worth twelve billion today,” I said.
The Trump supporter went silent.
"And he got about $850 million in tax subsidies, just in New York alone," I said.
More silence.
"He's not a businessman," I said. "He's a con man. "Hope you enjoy your coffee."

SADIQ KHAN
The London mayor said that Donald Trump's negative rhetoric about Muslims is helping ISIS.  He made his comments as he toured around America and Canada.


ANTHRAX (the band)
Anthrax performed an acoustic cover of the Pink Floyd classic “Comfortably Numb” during an appearance on the Opie with Jim Norton talk show.

Terrence Crutcher
Crutcher was fatally shot by Tulsa police. He was unarmed, the police chief says, as ‘disturbing’ dashcam video is released.

Stop singing in the car.
Exercise. I'm too lazy to even keep up with a Kardashian.
Care about who Taylor Swift is dating
Log into Tinder ever, ever again.
Like The Notebook.
Play hashtag games all day.

#4DaysTilIlluminate
Excited fans Tweeting about Shawn Mendes’ new album, Illuminate, which is due this Friday.

The Snake
Donald Trump read the lyrics to Al Wilson's 1968 R&B song "The Snake" during a rally in Iowa to illustrate what might happen if the United States allows Syrian refugees into the United States.

The song tells the story of a woman who finds a snake on the streets and takes him in, but he turns on her.

"Take me in, for heaven's sake. Take me in oh tender woman, sighed the snake.....But instead of saying thanks, that snake gave her a vicious bite," reads the lyrics.

You can find the quiz here --> https://www.buzzfeed.com/perpetua/millennial-stereotype-percent?utm_term=.uwj4PVKJX

Dorcas
Trending because there was a contestant on Jeopardy with that name.

​While the rest of the Philadelphia Eagles stood along the sidelines during singer Jim Cornelison's performance of the national anthem before Monday night's kickoff against the Bears at Soldier Field, Eagles safety Malcolm Jenkins, defensive end Steven Means and cornerback Ron Brooks raised their fists in silent protest.
News
Entertainment
Audio